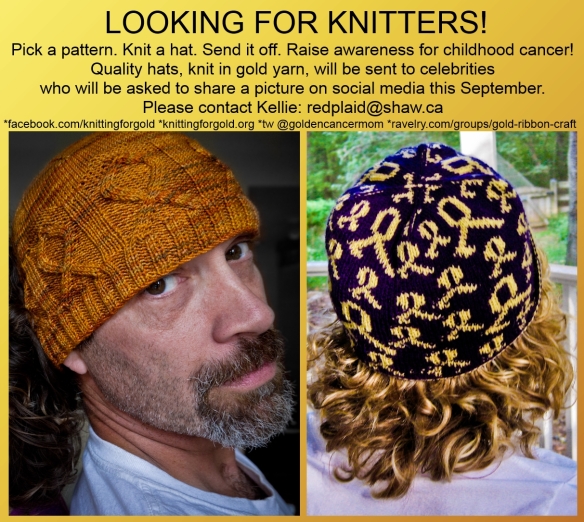 It’s time to start preparing for a publicity campaign.

Something that Bronwyn’s cancer journey has given us, that is positive, is the chance to met several celebrities. Most of these meetings can be credited to Gilda’s Club, a charity started in the name of Gilda Radner to give support to those going through cancer treatment and their families. It has shown me that celebs are no different than any of us. They have huge hearts and have no problem using their status to support legitimate, good causes.

The Plan: To knit hats in gold yarn and send them to celebrities with info on the project and ask they take a picture of themselves in the hat and tweet it or vine it or FB it, whatever form of social media they use.

The Need: Knitters! We need knitters to knit ether the September is Childhood Cancer Awareness Month Hat or Speaking of Cancer out of nice yarn {nothing fuzzy}.

What to do with the hats: Hats could be sent to me. I have some direct connections and Gilda’s Club will help as well. It would be great if we could find others who are willing to find addresses and send hats too in the USA, Europe, Australia and other countries. We will work on literature to send with the hats. Something like a card, not to wordy.

When: Knitting could commence at anytime but we will aim to send out hats in August/September.

Here is a picture from April, 2013, when we met Maggie Q, star of Nikkia and the up coming movie Divergent. Long story short: She pays our rent {found and furnished our Toronto apartment} as Bronwyn waits for a heart transplant. I will be personally knitting her hat! Bronwyn is the tall one. The other two munchkins are heart transplant recipients. 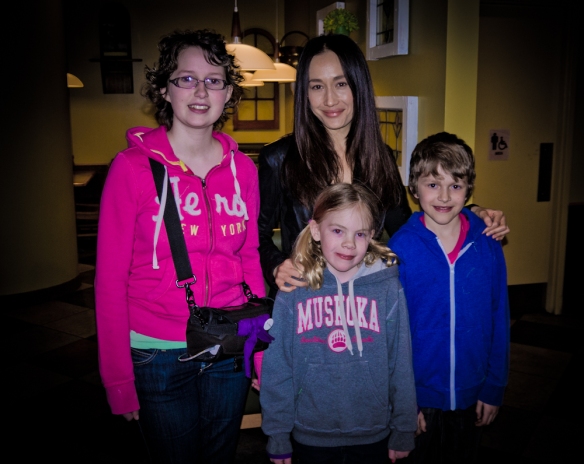 8 thoughts on “Calling all Knitters!”